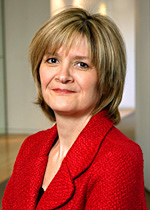 The other week Professor Linda Rouleau was inducted a fellow of the Canadian Academy of Social Sciences. Getting inducted in the Canadian Academy of Social Sciences is a great honor given to a few. Approximately 2000 scholars is elected by their peers to the academy, that was established in 1883 and whose primary objective is to promote learning and research in the arts, the humanities and the natural and social sciences.

*********
Full Professor Linda Rouleau (Management) has been inducted into the Academy of Social Sciences, Francophone Division, of the Royal Society of Canada. This announcement brings to 16 the number of HEC Montréal professors in this select group of over 2,000 distinguished Canadian scholars, artists and scientists, elected by their peers.

Professor Rouleau holds a PhD from HEC Montréal and Master’s and Bachelor’s degrees in Sociology from Université Laval. She has been with the School since 1998. Her fields of interest include middle managers, sensemaking in organizations and social and organizational practices in strategic and extreme settings.

A guest professor at the UMEÅ School of Business and Economics in Sweden, and co-Director of the Strategy as Practice Study Group (GéPS), she received the Pierre Laurin Award (Research) from HEC Montréal in 2011. Professor Rouleau has played an active part in developing and popularizing the concept of strategy as practice. For example, she co-directed the Cambridge Handbook of Strategy as Practice, the reference in this research field. She has also published articles in leading academic management journals